The Characteristics of a Possible Future War against I.R. of Iran and Strategies to Deal with It

A war involves three strategic, operational and tactical levels and each of these mentioned levels has its own characteristics. Any space and place in which a war is being implemented is called a dimension, such as land, air, sea, etc. The main objective of this paper is to outline the strategic dimensions and features of the future war and to provide strategies of the future war against I.R. of Iran. It should be. This research has been carried out through using a field- and case-oriented method and is of a developmental-applied nature; the method of data collection was a library and field-oriented approach. The statistical population of the study was 73 individuals, which analyzed using the expertness analysis methods. The results of the research indicate that future wars have 7 dimensions (terrestrial, naval, aerospace, cyber or cyberspace, cognitive or media and mind space) and 10 strategic features (multidimensionality, cognitive-orientedness, intelligence-hood, impact orientedness, technology orientedness, capability-orientedness, people-orientedness, online and horizontal commanding and controlling, informational domination, value orientedness and idealism). After the environmental study, 9 cases of strength, 8 cases of weakness, 6 cases of chance and 6 cases of threat were obtained. Based on the SWOT model, eight strategies have been presented that have been combine with 10 strategic, fundamental and important features of the future warfare and based on them 8 appropriate suggestions have been presented. According to the obtained strategic position, the condition of the Armed Forces I.R. of Iran in the forthcoming war is a desirable situation, and at the beginning of the first quarter, i.e., the direction of the invasion has been focused on strength. 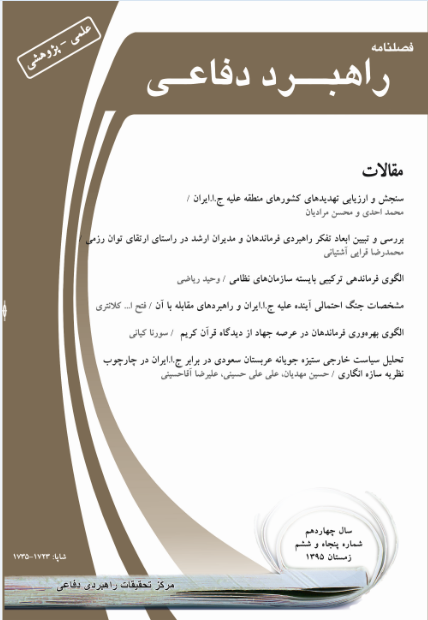